In 2007, I wrote a review in online Islamic newspaper 'Nieuwsfeit.nl' on a column, written by a columnist of Dutch Christian newspaper Trouw, Eildert Mulder: ‘The four rightly guided caliphs were no Muslims, they were Christians’. Eildert Mulder wrote several similar columns for this newspaper, of which the majority have been wisely deleted, also this one. Yet, they are rather exemplary for the way Islamists and Arabists in the West operate and try to influence opinions. They have every right to express their views, like all of us, but it would be helpful, if they enriched them with solid proof.
In his article, Mulder used a few ancient coins to illustrate his case. German Islam-expert Volker Popp, Online publishing office of the German Saarland University, Universität des Saarlandes, had written a few things about these coins, one of which supposedly displays khalifa Muawiyya with John the Baptist’s head in his hand. Professor Karl-Heinz Ohlig and Christoph Luxenberg are connected to this university, too. The latter has a publication, it’s name is Der Koran zum ‘islamischen Kopftuch’. Firstly, Volker Popp says in his article, 'Bildische Darstellingen aus der Frühzeit des Islam', that the coin ‘definitely’ must date from the era of the four righteous caliphs, the period 632 – 661 AD. ‘Ali ra’s caliphate indeed was contested by Abu Sufyan’s son Muawiyya, who resided in Damascus. Muawiyya may have had his own coin, however, how likely is it that he allowed himself to be immortalized with John the Baptist’s head? Would a Christian monarch be portrayed with the head of a man as important to Christianity as John the Baptist in his hand? Volker Popp must admit that the head in the man’s left hand, a ruler figure with a lance ‘might as well be an censer’. Thus the object is described in art catalogues too. The coin’s backside shows a letter M with a cross. This could, says Popp, refer to its value, a thousand talents, which could make it a Roman coin. However, the letter could also mean something else, like ‘Muawiyya’, perhaps even ‘Muhammad’. The letters DAM are mentioned on it, which must imply that the coin has been struck in Damascus, however, Popp denies the Romans had their coining production there. Thus the suggestion is made that Muawiyya very well might have been a Christian Roman ruler and not ‘Ali’s Saudi rival. Question remains whether the coin may at all be Muawiyya’s product. The exegesis by both Volker Popp and Eildert Mulder is highly speculative and is by no means supported by evidence or findings. The coin may very well represent nothing more or less than a ruler figure with a censer and it’s financial value.
On the same website, Luxenberg says, in his article ‘Der Koran zum ‘Islamischen Kopftuch’, that Qur’anic verse 24:31, which says that women should cast veils over their bosoms, in Aramaic truly means that women should 'cast a belt over their loin’. A belt around their waist. Also in Christianity, the belt is a signaficant symbol of chastity for not only women, but monks too. Also, from hadith 319 Book 60 Volume 6 by Sahih Buchari, would appear, that women used to wear a cloth around the waist covering the hips:
Volume 6, Book 60, Number 282:
Narrated Safiya bint Shaiba:
‘Aisha used to say: “When (the Verse): “They should draw their veils over their necks and bosoms,” was revealed, (the ladies) cut their waist sheets at the edges and covered their faces with the cut pieces.”
Shortly, Luxenberg thinks we should stop making things difficult, and we should read the Qur’an the Aramaic way. It’s not necessary to consider the new Islamic duties mentioned in this hadith, in his eyes.

'Um-Salama said, "I got my menses while I was lying with the Prophet (ﷺ) under a woolen sheet. So I slipped away, took the clothes for menses and put them on. Allah's Messenger (ﷺ) said, 'Have you got your menses?' I replied, 'Yes.' Then he called me and took me with him under the woolen sheet." Um Salama further said, "The Prophet (ﷺ) used to kiss me while he was fasting. The Prophet (ﷺ) and I used to take the bath of Janaba from a single pot."'
All these efforts by Christians and other Westerners to re-write Islamic history indicate a non-acceptance of religiously-inspired records of history. For them, so it seems, it is decided, that such scriptures are fabricated myths, fairy-tales, and miscellaneous gathered facts and narratives that may be fine sources for inspirational purposes, so-called allegories or deeper truths. Incessant efforts are made to parallel Islam with Judaism and Christianity. This is no good approach. The stories emerged in different eras of history; among different peoples and circumstance. Especially Christianity, suffered tampering. Romans, the popes and other rulers destroyed or hid parts of its inheritance. The result is, different churches have each their own Bible compilations. Furthermore, Jewish history has a much longer, older time span. It is true, that the Bible holds the same narratives of the same events, but then we see that names, dates and events do not quite match. Judaism and Christianity, therefore, had to rely a lot more than is the case for Islam, on interpretation by scholars from later eras. Islam has a much shorter and clearer defined area of study with Qur’an and ahadith. One must acknowledge, that Islam has a different origine than Judaism and Christianity and also among different people. Thus, early on, one single qur’an could be recorded and memorized, which is still used by the entire Islamic umma, without modifications. Something similar goes for the recording of ahadith, however, it must be admitted, that only part of them was written down immediately, and part of the most authoritative ahadith were recorded only two centuries later, from many oral sources. This happened, though, in a way that they indeed can be used for historic reference. They may not each and everyone of them be infallible, but we can safely conclude, that the memorized events indeed took place.
Islam, sees creation and the Scripture as miracle enough, without need for stunts. However, the conclusion that the Prophet pbuh indeed received Divine Revelations, can be seen as such miracle. But, even with reliable ahadith at hand, it still is impossible to prove in a scientific way. Not often supernatural events, in the sense of spectacular ‘miracles’, take place; then to be reliably recorded. Meaning, events like walking on a water surface, apparitions of angels or Allah swt showing Himself. No one other than the Prophet himself, had this direct connection with the archangel. We can only rely on his words. Does that automatically discard his words as lies, inventions, fabrications? With what right? We'd need clear evidence. Without evidence, we can't reject such words. This aspect of it all, surely is a question of faith. They are unique events, in defiance of the laws of nature. Events like these, are especially challenging to those who prefer a scientific, empirical approach. Many people were direct witness to unique, well recorded, unusual events. Westerners try to ascribe the Prophet epilepsy or other illnesses--he underwent ‘a seizure’ at the moment he received a new Revelation. But, with what evidence? They haven't.
Sources:
'Der Koran zum ‘Islamischen Kopftuch’ Christoph Luxenberg
'Bildische Darstellingen aus der Frühzeit des Islam' Volker Popp. Further reference: http://www.europainstitut.at/upload/publikationen/publikation_32.pdf or http://www.aai.uni-hamburg.de/voror/Personal/heidemann/Heidemann_Texte/Heidemann_Quran_in_Context_2010_Representation.pdf
(The links mentioned in my blog aren't always current, as they are based on a newspaper article of several years ago, 2004, but if you type the titles in your browser, you get many articles with this same content.)
University of Southern California USC-MSA Center for Muslim-Jewish Engagement (Compendium of Muslim Texts) http://www.usc.edu/org/cmje
'The Hadith of the Prophet Muhammad', http://sunnah.com
Comparison Established heritage of Islam falsification 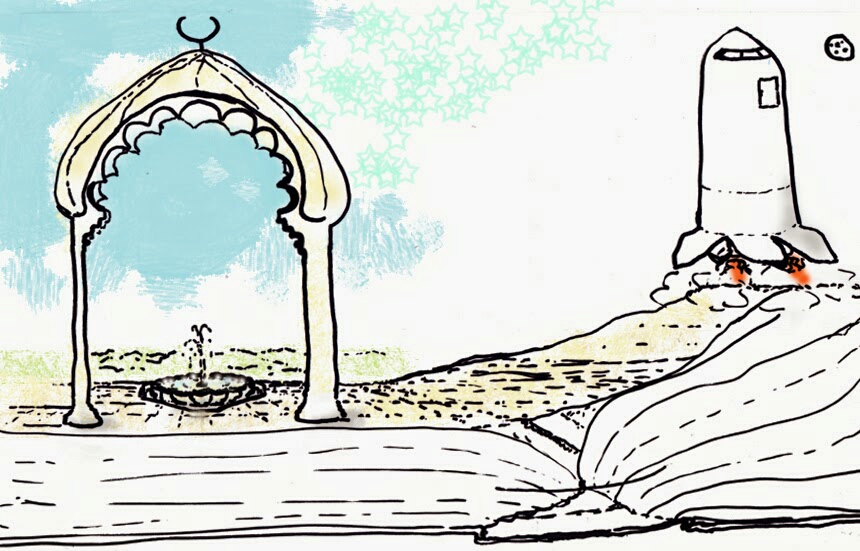