We Think We're a Big Deal, But, To Allah SWT, We Are Only Small ~ So, Do Well & Do Not Destroy

Can you see how perfect she looks from afar: Our joint home?

I tried a sketch of Earth seen from space, and this is what Earth could look like.

Look, how perfect she is. The colors of seas, deserts, woods, and the air around her. The Moon may be visible, too.

I want you to think about it. For good reasons, it all was mentioned in the Koran al Kerim:

'There are some who declare: 'We believe in Allah and the Last Day', yet they are no true believers. They seek to deceive Allah and those who believe in Him: But they deceive none save themselves, though they may not perceive it. There is a sickness in their hearts which Allah has increased: They shall be sternly punished for their hypocrisy. When it is said to them: 'Do not commit evil in the land', they reply: 'We do nothing but good'. But it is they who are the evil-doers, though they may not perceive it.' (2:8-12)

'Believers, Jews, Christians, and Sabaeans -- whoever believes in Allah and the Last Day and does what is right -- shall be rewarded by their Lord; they have nothing to fear or to regret.' (2:62 & 5:69)

'O ye assembly of Jinns and men! If it be ye can pass beyond the zones of the heavens and the earth, pass ye! Not without authority shall ye be able to pass!' (55:33)

'Allah does not forbid you to be kind and equitable to those who have neither made war on your religion nor driven you from your homes. Allah loves the equitable. ...' (60:7)

'He created seven heavens, one above the other. His work is faultless. Turn up your eyes: Can you detect a single flaw?' (67:3)

These words are written for you too -- you, who reads them now. No matter if you're a public official, a politician, or an average citizen like me. No matter if you call yourself a Muslim or anything else. Make no mistake about it. It's not allowed to randomly blow up other people, nor to excuse those who do so. And, whenever you try and do such, you can't change the universe anyway. From another planet, you are hardly visible; you're not even a crumb in space. So don't wast your energy on causing death and destruction. 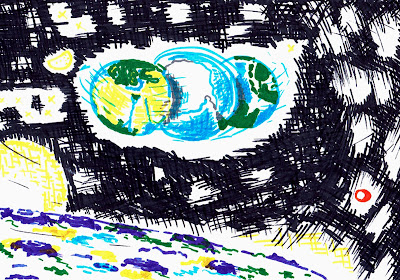 Posted by HajarsIdeas at 12:44 PM No comments: