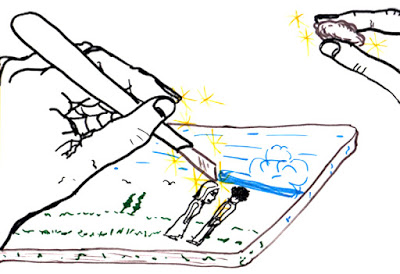 A while ago, I read somewhere: 'Are you God yet?' A thesis meant for further thought or discussion. The topic interests me particularly, so I want to try and answer. The word yet intrigues me, because it apparently allows the concept of a temporary God.

The idea that you and I could be God, is unfamiliar to those raised in Jewish, Christian, or Islamic traditions. The Christian idea of God resembles most that of a human, male artist who 'makes' everything from matter, perhaps aided by utensils, see top image. In Jewish and Islamic thought, the hands ought to be removed. Perhaps the knife can stay, but the Jewish and Islamic concept don't allow a human God-figure. [112.4] And none is like Him, says the Qur'an. In these three religions, God is not to be identified with His/Her/Its creation; God is the force behind it. But if we don't know God's nature, what's against thinking that God indeed is everything? This is what my fellow blogger must have thought, and there's a point in it. The entire top image could be seen as God. But then enters a complication many people may dislike: It can only mean, that God is neutral and imperfect. This is because all creatures have an enemy in creation, and because people are prone to discontentment. People are inclined to set norms for themselves and others, and they are inclined to failure in living up to norms. Religious people are not brought up with a neutral god. God sets the norms and decides in the end who have done their best to stick to those norms, and who haven't. Some kind of retribution then follows. (For Muslims a big issue, because not-following the rules is disobedience, and partly not-following them may be hypocrisy, an even worse sin).

It is useful to study other religions and philosophies than your own, because you see your own ideas in a broader perspective and might be inclined to see other people's true thought contributions to this world. And the world has several religions –– with conflicting or matching theories and norms. For instance, Islam says that every person has but one life. After death, we wait in the grave till judgment day. Then will be decided who goes to paradise, and who goes to hell. Yet, Hinduism and Buddhism say that after death we all get a new life, or become another creature. Only Buddhism doesn't recognize a self-existent, eternal soul, and doesn't believe in creation by an omnipotent god. The concept of me and you being God would probably best fit into Buddhism. But do these thoughts justice to the question 'are you God yet'? I doubt it, because there's more to it.

Maybe it helps to first look which parts of traditional religions could be seen as plausibly, reasonably true theories. It is plausible, that there is an invisible force behind everything around us. It is plausible, that everything around us has always and eternally existed –– after all, where could matter have come from? It's also plausible, that everything we know, both matter and the forces and abstractions behind them, all-in form 'God'. Calling only the force behind everything 'God', however, is equally plausible. So 'God' can very well be just a matter of definition –– taste? It makes it possible to debate, whether God is eternal. If you and I are a little piece of God, God as a concept may be eternal, but God in you and me perhaps isn't. Consequently, it is plausible, that God has created/revealed different religions, philosophies, and societies. But how plausible is it, that one is superior over the other? That is a matter of forensic archeology and text falsification. It is plausible, too, that phenomenons people may refer to as 'ghosts', spirits, or souls, do exist. Yet, it's also plausible that they may not exist. What else is plausible? That God is omnipotent and perfect, or is omnipotent and perfect only in certain fields. In other words, it's even plausible that God is not omnipotent and perfect. It casts another look on our imperfect behavior and emotions of discontent. If we're God, as our imperfect selves, we must live with the fact that we may not like ourselves and our sins, and that we need to find the tools towards acceptance. Buddhism traditionally is strong at that issue. And it's plausible, that time and the law of nature have some link to God.

Secondly, it also helps to look at those parts of traditional religions that remain out of sciences' reach: The issues we don't know and, at best, can believe in. The hereafter and divine sanctioning are those issues. We don't know –– and usually don't like the thought –– if God is neutral towards his/her/its creatures, or if God sanctions them. We can't dismiss the thought of divine sanctioning, yet, stumble upon the differences between religions. We don't know if spirits are souls of the deceased, nor if they have eternal existence. Another issue we don't know, is if our soul is eternal and self-existing, or temporary. The question if at all we were created, by who and how, is another we have no answer to. So it's hard to fill in those questions for others and impose them, yet it's often been done. It's disliked that people with harmful behavior get away with it unsanctioned. And people like to exercise power. But then, comes the largely unanswerable question of honesty. How honest are religions, when they try to give answers? Truth is, that it's unknown if the prophet Muhammad truly received revelations from God via archangel Gibril. This in spite of good documentation of the prophet's words. Even the prophet pbuh, technically speaking, had to trust his instincts. If we want to successfully pass honest judgment, it's best to stick to that which is plausible, without imposing it on others. 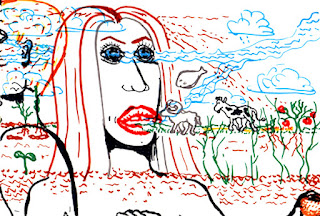 Therefore, from an honesty-point of view it's plausible to wonder: "Am I God?" It's possible to label everything as God. Or to make one's own definition of God. Last weekend, I confronted my family members with the issue. My brother said "we don't know, but people will always try to gain power over their group and then use religion as a tool". My brother-in-law said "I don't like the thought of a neutral God, and for the rest I don't know. But to me, your sister is God. For me that's enough". I find it a great answer. No more words needed.

Faith what is it 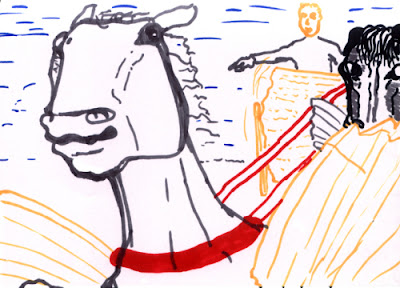