Bible and Qur'an al Kerim both narrate Adam's creation; his wife; his first dwelling in a garden and the many freedoms he and his wife enjoyed in this garden. Only one prohibition they had to live with: The fruit of a specific tree wasn't allowed for them to eat.

The Bible then says, in Genesis 3, how man was seduced by woman to eat the fruit, after the woman had been seduced by Satan to eat it. The text actually doesn't say, why Satan picks her first, or why she responds first. It has, however, big consequences for them both. Eve and Adam are described as if they represent humanity. After their disobedience, which rests on both of them, they repent. They are forgiven, but they are dismissed from the garden and sent down to Earth, where they receive a new assignment, different for men and women.

Judaism doesn't recognize an original sin shared by humanity as a whole. Judaism relies on personal responsibility and intent of each believer to abstain from Satan and sin. Moses, Musa, said this in a sermon, Deuteronomium 30:1-14, verses present in every Bible:

In Christianity, however, there's a gap between Adam and Jesus. It's only to be filled centuries later, when Jesus arrives. Jesus is God's only child, only son, and God's manifestation on Earth as a living man. He has come to live with people; to introduce himself as the One God who will later, at the Day of Resurrection, raise people from death and judge them. Christianity says, that Jesus had come to put it right: The first sin, committed by the first human couple. It still weighed upon the fate of all mankind. Humanity had never been fully exonerated of the disobedience in Eden, until Jesus came. The original sin story is a Christian concept. It suggests, that God had corrected Himself by sending His only son, to remove imperfection from humanity: Negative behaviours and inclinations. Jesus also restored good relations between man and woman, as we may see in Paulus' letters, NT.

Many Christian commentators say, the Old Testament mentions several predictions of Jesus' arrival on Earth with the aim to exonerate mankind of this first sin. Such as Ps 16:8-11 and Dan 9:24-27:

Psalm 16:8-11 New International Version (NIV):
'8 I keep my eyes always on the Lord. With him at my right hand, I will not be shaken. 9 Therefore my heart is glad and my tongue rejoices; my body also will rest secure, 10 because you will not abandon me to the realm of the dead, nor will you let your faithful [a] one see decay. 11 You make known to me the path of life; you will fill me with joy in your presence, with eternal pleasures at your right hand.' Jesus speaks directly here, according to some commentators.

Daniel 9:24-27 Tanakh Online:
24 Seventy weeks [of years] have been decreed upon your people and upon the city of your Sanctuary to terminate the transgression and to end sin, and to expiate iniquity, and to bring eternal righteousness, and to seal up vision and prophet, and to anoint the Holy of Holies. 25 And you shall know and understand that from the emergence of the word to restore and to rebuild Jerusalem until the anointed king [shall be] seven weeks, and [for] sixty-two weeks it will return and be built street and moat, but in troubled times. 26 And after the sixty-two weeks, the anointed one will be cut off, and he will be no more, and the people of the coming monarch will destroy the city and the Sanctuary, and his end will come about by inundation, and until the end of the war, it will be cut off into desolation. 27 And he will strengthen a covenant for the princes for one week, and half the week he will abolish sacrifice and meal- offering, and on high, among abominations, will be the dumb one, and until destruction and extermination befall the dumb one.

Old Testament translations aren't always identical. For instance, verse 7:13, Daniel, says in the English Tanakh: 'I saw in the visions of the night, and behold with the clouds of the heaven, one like a man was coming, and he came up to the Ancient of Days and was brought before Him.' The King James Bible uses different words: 'I saw in the night visions, and, behold, one like the Son of man came with the clouds of heaven, and came to the Ancient of days, and they brought him near before him.' Same thing we see in verse Ps 16:10. The Tanakh mentions 'Your pious one' and King James Bible mentions 'thine Holy One'. So, there's no unanimous approach towards Jesus. Christian Bible translations see predictions of Jesus in certain Biblical verses, where the Tanakh, the Hebrew Bible, refrains from such comment.

Jewish commentators, such as Rabbi Baruch, say that Christian commentators must have made translation errors and must have been mistaken in dating the events. They neglected the difference between the Jewish and their own calendars. Therefore, the messiah mentioned in book Daniel 9 must have been someone other than Jesus. Generally, with exception of Messianic Jews, Jewish scholars doubt that Jesus was the messiah mentioned in the Old Testament. They deny that Jesus was supposed to remove sin from humanity, but do acknowledge a Messiah. This Messiah can't be Jesus, as Messiah will rebuild the Temple and restore Jerusalem as city of power, and he will restore justice. This is a future event, not yet happened. And, Jesus didn't acquire worldly power; he was executed and Jerusalem was destroyed soon after that. Jewish sources doubt Jesus' execution as a Jewish act. The Romans must have tried and convicted him for an offense that would require other punishment method in Jewish law. The New Testament says, Jesus was executed without proper trial, in the Pesach-season, at whimsical popular request. The Romans executed many Jews, among whom many with messianic claims, but not without trial. Jewish sources do not deny Jesus' crucifixion (with some exceptions); they do question or debate a Jewish role:

'From the Jewish point of view, the crime of which Jesus was convicted by the Jewish priests is greatly in doubt (see Jesus). If it was blasphemy, lapidation should, according to Jewish law, have been the penalty, with suspension from the gallows after death (Mishnah Sanh. iii. 4; Sifre, iii. 221). Nor were any of the well-known measures taken (Sanh. vi.) which provide before execution for the contingency of a reversal of the sentence. Neither was the "cross"—i.e., the gallows for hanging—constructed as usual after lapidation, and as ordained in Sanhedrin vi. 4. His hands were not bound as prescribed; the "cross" was not buried with his body (Maimonides, "Yad," Sanh. xv. 9). Whether the Jewish law would have tolerated a threefold execution at one and the same time is more than uncertain (Sanh. vi. 4; Sifre, ii. 221).' (JewishEncyclopedia.com | Crucifixion)

Then, later again, comes the Qur'anic story, in verses 7:10-27. It doesn't have the same high degree of mysticism as the Biblical story, in my opinion. Adam's story is brought to us rather as a generalised allegory about the human lifecycle ~ though there's nothing wrong with seeing Garden of Eden just as it is: a garden away from Earth. All people can relate to his journey. No differences is made between Adam and his wife. Every human being, or at least most of us, enjoy a sheltered childhood environment, at the latest until puberty. Childhood is an age of great freedom to experiment, also for the mind. Puberty is the age where the human brain gains awareness of sin, evil. It's an age of testing boundaries; getting caught by supervisors or not; finally repenting. At some moment, the lesson is taken that it's better to abstain from breaking rules, because not everything was meant for us, or me, to use, own, or eat. Which is valid for each creature, human or not. And: Puberty and adolescence are the age where people gain awareness of two life aspects: That it's their life assignment to enter the world, and they gain awareness of their specific stance. They become self-conscious. However, their assignment to lead a specific, decent life on Earth, in obedience to Allah swt, has been given from the first moment they existed. And, it is not a safe life without enemies. Personal responsibility and intent of each believer decide forgiving of sins, and many sins are forgiven. Like Judaism, Islam doesn't recognise a collective, inherited sin. A believer must acknowledge the prophets, especially the messiah, who will collect humanity at judgement day.

My own conclusion after reading several texts about the (proverbial) original sin is that, as faitful, we should read each others' books, if only for verification of certain facts and quotes. It would be great to come to better understanding and knowledge. And hence, hopefully, to better relations.

Biblical verses about Adam and OT-verses understood by commentators as prophesies about Jesus: 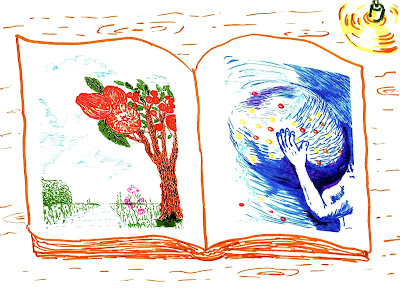 Posted by HajarsIdeas at 7:43 AM No comments: