Ancient Greek Religion Had Only Little Influence On Islam

Ancient Greece had a polytheistic religion with many antropomorphic and other real life-inspired gods. It rather was a literary tale of human history with real life personalities, than a book of religious law. There were many, many gods, with both good and evil personalities. Even abstract ideas could have a divine personification. But, there were also thirteen main gods: The Olympian gods Zeus, Athena, Apollo, Poseidon, Hermes, Hera, Aphrodite, Demeter, Ares, Artemis, Hades, Hephaistos, and Dionysos. They were believed to reside on Mount Olympos. They were recognized as gods across Greece. Zeus was their leader. The community of gods had its human stories; they had children; but, they could also influence human earthly affairs. Prayer and sacrifice could result in divine help to a personal matter, or to an issue in society, business, or other. Precisely these aspects, antropomorphic polytheism, is the most crucial difference from Islam. It isn't really necessary to dwell on it for long, here. There's a wealth of interesting websites and books about Greek religion.

Any interesting similarities between Islam and ancient Greece can be found in philosophy. The eldest good documentation we have, nowadays, is Socrates' philosophy, more than 400 years BC. Greek Philosophers, from the oldest days of Greek civilization, somewhere 600 BC, asked the questions that clashed with the religion of their society and sometimes got them in serious trouble with their authorities. But, they also asked and answered questions that are interesting to science and philosophy today, also for Muslims. That's where my study begins. 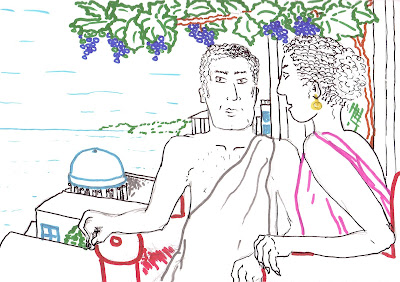 Posted by HajarsIdeas at 12:45 PM No comments: