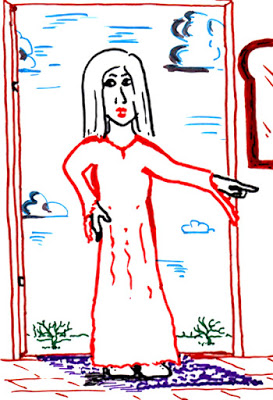 I'll try to explain, why women in Islam aren't the doormats as they are usually depicted, without too much repetition of previous blogs with the same tags. See those for any proof of my next words. We, men and women, are created equally. Men aren't women's 'head', nor are they the 'real' representant of humanity, nor are they created in God's image. God isn't even a male, says Qur'anic verse 112:4. Men and women procreate differently, though. This results in a different life course for men and women. It's more likely, that women start at a career outside the home at a later moment in their lives than that men do. Women must start young, if they want a family; men can usually start at any time when they are past childhood. Speaking generally. This is the reason, why Qur'an lightens the duty (if applicable) to cover themselves for women past childbearing age, in verse 24:60. But there's no law to prevent women to start any career at any age, with exception of prostitution. And women aren't even barred from leadership in society; female leaders in religious history testify to that. Fir'aun's wife; Bilqis, the queen of Saba; and Maryam, are examples. This is something we shouldn't forget. Something else we shouldn't forget, is that early Islam left us important female scholars, yes scholars, such as Aicha, wife of the Prophet. She explained many hadiths for us, answered questions, knew the Qur'an by head. And she wasn't the only one.

Also a traditional housewife, has authority. Firstly, as a wife and a mother. Secondly, in Muslim societies, also the housewife has an economic role and property of her own. That property, is hers. She is free to do business with it. 'Housewife' as a concept, is in western society associated with someone stripped of her independence, because women had no property and couldn't do business, work, or sign their own papers. Women in the west can do business, work and place their signature, nowadays. But, in reality, they still have very little property to themselves. Home ownership without debt, is a prerogative of Muslim society. And, perhaps, of other societies outside western culture. What does this mean for the Muslim housewife? She can use her house and garden for poultry, livestock, vegetable culture, arts and crafts; for personal or commercial benefit. That has economic benefit to her and her family. It will add to her self-reliance. A woman has every right to own land, a house, and her husband may very well accept her contribution to the family property. A woman can go live with her husband in his home, but the other way round, is just as acceptable, and isn't unusual. A woman may not need her husband's marriage gift. Why not? Because she has fortune and income of her own. She has every right to choose to keep her independence and has no obligation to hand over her estate to her husband or other male relative. In Islam, all people with good mental health, are allowed to mind their own business, work, own, inherit.

All in, female authority does exist in Islam. The discussion shouldn't be necessary, really. Surah 4 gives some verses to this effect, 4:4-7, among others:

'And give unto the women (whom ye marry) free gift of their marriage portions; but if they of their own accord remit unto you a part thereof, then ye are welcome to absorb it (in your wealth). (4) Prove orphans till they reach the marriageable age; then, if ye find them of sound judgment, deliver over unto them their fortune; and devour it not by squandering and in haste lest they should grow up Whoso (of the guardians) is rich, let him abstain generously (from taking of the property of orphans); and whoso is poor let him take thereof in reason (for his guardianship). And when ye deliver up their fortune unto orphans, have (the transaction) witnessed in their presence. Allah sufficeth as a Reckoner. (6) Unto the men (of a family) belongeth a share of that which parents and near kindred leave, and unto the women a share of that which parents and near kindred leave, whether it be little or much - a legal share. (7)' (4:6&7)

Source & Further Reading:
Quran Explorer
Posted by HajarsIdeas at 7:32 AM No comments: